Guidelines for scaling the complex movements for older athletes

It is not uncommon for trainers to hit the wall trying to teach complex skills to masters. The standard progressions that are effective with a younger adult may not be as effective with a masters athlete and often require additional steps and strategies. Standard progressions for CrossFit skills are usually based on reducing the effort component of the skill, e.g., using a smaller box for box jumps or reducing the range of motion for a handstand push-up. However, with a masters athlete, particularly a late masters athlete, it may be necessary to reduce the thinking component or even practice the neurological component separately from the skill itself. For example, even on a tiny box, a masters athlete may freeze while attempting a box jump, and the progression may have to start with basic jumping drills in horizontal patterns such as hopping and skipping until the neurological pattern is established. We have seen clients who cannot correctly jump onto a 10-lb. plate. Confusion can reign inside a masters athlete’s head when trying a new skill. In some cases, underlying physical limitations may have to be addressed in isolation before the neurological component can be effectively practiced. For example, if the athlete does not have the requisite strength and mobility to perform a calf raise, he or she will not have a foundation to practice jumping.

We Can Take These Things for Granted

When developing progressions for a deconditioned late masters athlete, a key teaching point is that we need to check and develop strength first, develop the mechanics second, and then progressively increase the effort third. It can take considerable time to reverse the effects of being significantly deconditioned.

A typical box jump progression for a younger athlete may occur over two to five sessions and consist of the following steps:

The box jump progression for a deconditioned late masters athlete may take six months or longer and require 15 or more steps:

A typical pull-up progression for a younger athlete may occur over six to 12 weeks and consist of the following steps:

The pull-up progression for a deconditioned late masters athlete may take two to three years and require 15 or more steps:

It is a reality, particularly for the late or injured masters athlete, that some movements need to be avoided entirely and should be excluded from the program. In these cases, movement substitution can be an effective way to preserve the intended stimulus. 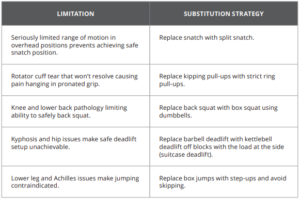 This is not intended to be an exhaustive list but rather an example of how even the most deconditioned or physically limited athlete can continue to participate in the program using clever substitutions.

The trainer should periodically reassess whether substituted movements can be reintroduced to the program. The goal remains having the client undertake the full program if possible with appropriate scaling, but both parties need to accept that in the case of unresolvable pathology or injury, reintroduction of some movements may never be possible, and even attempting them could set the athlete back. Each case should be assessed on an individual basis. The trainer should be optimistic and pragmatic in equal doses.