“CrossFit Journal Article written by Tony Leyland and published in July 2008. We are republishing it in his own words”

I have had many conversations with CrossFitters, and others, about the efficacy of CrossFit programming. As somebody who teaches about physical conditioning at the university level, I am interested in the unorthodox nature of CrossFit and the results it achieves. While the majority of trainers and athletes easily understand many aspects of CrossFit programming, there is a certain mystique (the infamous “black box”) regarding the metcon (metabolic conditioning) workouts.

We all know that a “Deadlift 1-1-1-1-1-1-1” WOD (Workout of the Day) is a strength workout and that “Run 10K” (everybody’s favorite!) is an aerobic workout. However, one of my favorite quotes from the CrossFit philosophy is Greg Glassman’s injunction to “strive to blur distinctions between ‘cardio’ and strength training. Nature has no regard for this distinction.”

But how does CrossFit blur this distinction given that strength/power training and cardiovascular training are at different ends of the power spectrum? More simply put, when you do “Grace” or “Fran” or “Angie” or even “Linda,” what kind of training are you doing? Is it power, strength, or cardio? Can they be combined? To what extent do they overlap? Obviously, they in fact do, and this is one of CrossFit’s huge contributions to fitness, but it flies in the face of much of the accepted knowledge in exercise science. How does it work? What are the mechanisms? These are complex questions and the answers depend on many factors.

To describe what is going on in CrossFit-type metcon workouts, we must first have a basic understanding of measurements of human power output. While no CrossFitter consciously ponders his power output in the middle of doing “Grace” (at least not if he’s doing it with sufficient intensity!), the knowledge of where a particular activity falls on the human power scale provides an excellent basis for understanding how you complete that particular WOD and the resulting metabolic effects.

Table 1 shows the metabolic power, mechanical power, predominant energy system utilized, and time to exhaustion for a healthy male subject on an ergometer where movement velocity was held constant (Knuttgen, 2007). I have added an example of the type of activity for each of these power outputs.

Another way to present this information is to look at the power outputs of selected activities as a percentage of an individual’s maximum power output rather than a specific power output in watts.

Obviously, elite athletes can easily surpass the mechanical power outputs or times to exhaustion listed in Table 1. A specialized heavyweight Olympic lifter can generate 6,000 watts of mechanical power in a single lift (Garhammer 1993), and Lance Armstrong could ride up mountains in France generating close to 500 watts of mechanical power for 20 minutes, something the subject in Table 1 above managed for only 6 minutes, and that a typical 25-year-old could do for only 30 seconds (Blakeslee 2005). But how would these athletes do on “Grace” or “Linda”? For a specialized aerobic power beast like a Tour de France cyclist the answer is an obvious “Not very well.” However, the Olympic lifter may not do as well as you might think on them either, and a specialized power lifter would also struggle. A specialized bodybuilder, of course, would get completely “gassed” by most CrossFit WODs.

Table 1. The relationship of metabolic power produced in skeletal muscle to the mechanical power of activity. (Adapted from H.G. Knuttgen, “Strength

in 6 minutes would require approximately 20 percent of energy to be obtained from anaerobic systems, and a 14-second sprint would obtain approximately 10% of its energy from the oxidative system. 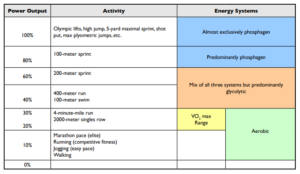 Figure 1. Percentage of maximal power output that is expended during various activities. (Adapted from H.G. Knuttgen, “Strength Training and Aerobic