The Heart Of The Snatch “Overhead Squat”

The overhead squat is the ultimate core exercise, the heart of the snatch, and peerless in developing effective athletic movement.

This functional gem trains for efficient transfer of energy from large to small body parts–the essence of sport movement. For this reason, it is an indispensable tool for developing speed and power.

The overhead squat also demands and develops functional flexibility, and it similarly develops the squat by amplifying and cruelly punishing faults in squat posture, movement, and stability.

The overhead squat is to midline control, stability, and balance what the clean and snatch are to power–unsurpassed.

1) Start only when you have a strong squat and use a dowel or PVC pipe, not a weight. You should be able to maintain rock-bottom squat with your back arched, head and eyes forward, and body weight predominantly on your heels for several minutes as a prerequisite to the overhead squat. Even a 15-lb. training bar is way too heavy to learn the overhead squat.

2) An Overhead Squat Depends on a Proficient Air Squat. Learn locked-arm “dislocates” or “pass-throughs” with the dowel. You want to be able to move the dowel nearly 360 degrees, starting with the dowel down and at arms’ length in front of your body, and then moving it in a wide arc until it comes to rest down and behind you without bending

your arms at any point in its travel. Start with a grip wide enough to easily pass through, and then repeatedly bring the hands in closer until passing through presents a moderate stretch of the shoulders. This is your training grip.

5) Start the overhead squat by standing tall with the dowel held as high as possible in the frontal plane. You want to start with the dowel directly overhead, not behind you, or, worse yet, even a little bit in front.

6) Very slowly lower to the bottom of the squat, keeping the dowel in the frontal plane the entire time. Have a training partner watch from your side to make sure that the dowel does not move forward or backward as you squat to the bottom. Moving slightly behind the frontal plane is acceptable, but forward is dead wrong. If you cannot keep the dowel from coming forward your grip might be too narrow.

The dowel will not stay in the frontal plane automatically; you will have to pull it back very deliberately as you descend (particularly if your chest comes forward).

7) Practice the overhead squat regularly and increase the load in tiny increments. We can put a 2.5-lb. the plate on the dowel, then a 5, then a 5 and a 2.5, and then a 10. Next use a 15-lb. training bar, but only while maintaining perfect form. There is no benefit to adding weight if the dowel, and later the bar, cannot be kept in the frontal plane.

With practice, you will be able to bring your hands closer together and still keep the bar in the frontal plane. Ultimately you can develop enough control and flexibility to descend to rock-bottom squat with your feet together and hands together without the dowel coming forward. Practicing for this is a superb warm-up and cool-down drill and stretch.

The overhead squat develops core control by punishing any forward wobble of the load with an enormous and instant increase in the moment about the hip and back.

When the bar is held perfectly overhead and still, which is nearly impossible, the overhead squat does not present greater load on the hip or back, but moving too fast, along the wrong line of action, or wiggling can bring even the lightest loads down like a house of cards. You have two, and only two, safe options for bailing out–dumping the load forward and stepping or falling backward, or dumping backward and stepping or falling forward. Both are safe and easy. Lateral escapes are not an option.

Your max overhead squat will always be a fraction of the average of your max back and front squat but, ideally, with time, they should converge rather than diverge.

The functional application or utility of the overhead squat might not be readily apparent, but there are many real-world occurrences where objects high enough to get under are too heavy or not free enough to be jerked or pressed overhead yet can be elevated by first lowering your hips until your arms can be locked and then squatting upward.

Once developed, the overhead squat is a thing of beauty–a masterpiece of expression in control, stability, balance, efficient power, and utility. Get on it. 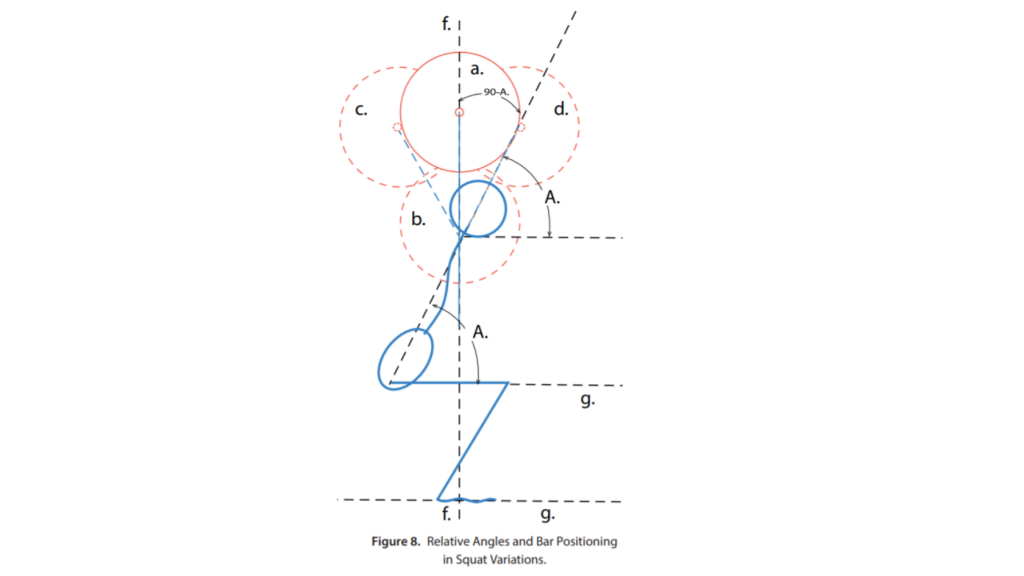 A: The torso’s angle of inclination above horizontal.As a squat matures this angle increases. The squat becomes more upright as the athlete’s strength and neural “connectedness” to the posterior chain increase. Lower angles of inclination are created in an attempt to cantilever away from a weak posterior chain and onto the quadriceps. While technically correct, the lower angle is mechanically disadvantaged, particularly in loaded variations.

Maturity and quality of the squat are determinants of all of the mechanics of the overhead squat.

f: This line defines the frontal plane. It divides the athlete’s front half from the back half. In the squat (as with most weightlifting movements), the athlete endeavors to keep the load on this plane. If a load deviates substantially from this plane the athlete has to bring the load back, which in turn pulls the athlete off balance.

b: This is roughly the position for a back or front squat.

a: This is the position for the overhead squat. With perfect stability, movement, and alignment this position does not increase the moment about the hip or back. The difference in an athlete’s strength when squatting here, overhead, as opposed to Position b, the back or front squat, is a perfect measure of instability in the torso, legs, or shoulders; an improper line of action in the shoulders, hips, or legs, and; weak or flawed posture in the squat.

c: This position has the load behind the frontal plane. It can actually decrease the moment on the hip and back. As long as the balance is maintained, the position is strong.

d: This is a fatal flaw in the overhead squat. Even slight movement in this direction greatly increases the moment in the hip and back. Moving in this direction with even a small load can collapse the squat like a house of cards.

The points of performance, common faults, and corrections carry over from the air squat.

If you want to learn about the PA Coaching, PA Home program or the PA Strength and Conditioning program or want to subscribe for it then click below: