Injury is an unfortunate outcome for some of those involved in sports. An estimated seven million Americans receive medical attention for sports related injuries each year. Once an athlete sustains an injury it is important that they progress through a focused rehabilitation program to allow them to return to their previous level of competition. This process has been termed the return to sport continuum and is separated further into three distinct phases (Figure 1).The approach taken during this transition from injury to full participation is critical in preparing the athlete for competition at a high level while also reducing the risk of re-injury. Unfortunately, the return-to-play (RTP) approach is not always handled in a systematic way. This can lead to a delay in the athlete’s RTP, leaving the athlete underprepared for the demands of sport with increased risk of re-injury or decreased performance upon return. 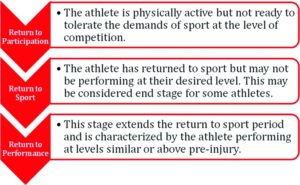 The RTP process is a multi-disciplinary venture including sports physicians, physical therapists, athletic trainers, strength and conditioning coaches, and sport coaches. Collectively, these professionals as well as the athletes themselves all play a role in the decision making process. Communication amongst these groups is paramount in optimizing athletic care and ensuring the best possible outcomes. However, the criteria used to gauge progress are often vague and lack standardization. As a result communication during the RTP process can be compromised. In some instances a standard of practice is used that focuses on local tissue adaptations based on healing time frames. While a time based approach does improve communication, Herrington and colleagues make a strong argument that this is insufficient and a task-based approach that focuses on clearly defined performance goals is the best approach for RTP. Thus it is important that the language that is used in describing the RTP process is familiar to everyone involved, is measurable, and reflects best practices.

As an athlete recovers, the emphasis progresses from protecting the injured tissue, to guiding the healing process, and finally into restoring the capacity of strength and energy systems. However, this restoration of strength and capacity may not be fully realized during the athlete’s rehabilitation. In the best-case scenario, an athlete will be “medically cleared” to play using RTP algorithms (e.g., muscle strength, joint range of motion, a series of performance tests, etc.), which have been shown to be of value in making this decision. However, even these approaches typically give very little information regarding how much training the athlete has performed or whether their fitness is sufficient to tolerate competition at a high level. Better documentation of the training process during RTP allows for the quantification of workload, providing direction to the program and enhancing communication. This need for an assessment of the workload performed in the RTP process and its potential link to re-injury was recently listed as a key focus area by the 2016 Consensus Statement on Return to Sport from the First World Congress in Sports Physical Therapy, Bern.

To address some of these concerns several authors have proposed RTP frameworks, which can aide in discussions amongst the relevant practitioners. For example, the updated Strategic Assessment of Risk and Risk Tolerance (StARRT) framework breaks the decision making process down into three parts: 1) the assessment of health risk, 2) the assessment of activity risk, and 3) the assessment of risk tolerance. Approaches like this establish a system that monitors the entire process while assigning each professional a role in clearing the athlete for RTP. None of the approaches referred to above have explicitly described an assessment of the athletes acute or chronic workload. However the authors of this paper find that the StaRRT framework suits this process well and propose that the assessment of workload should be included in each of the three categories laid out in the StaRRT framework. This will allow for a smooth transition from injury to medical clearance for RTP and on to return to performance while ensuring that the athlete has performed an appropriate amount of chronic loading to tolerate these progressions.

It is typical that strength and conditioning is performed by “healthy” athletes. However, injured athletes also benefit from a training program that prevents detraining and helps to re-develop any biomotor adaptations lost during the initial rehabilitation process. This thought process has led various authors to propose a comprehensive approach to strength and conditioning within the RTP paradigm. The role of strength training within rehabilitation has been discussed elsewhere; but very little has been described regarding re-conditioning, or energy systems development during the RTP process. All of the bodies’ energy systems play a supporting role at the onset of activity thus any form of training can be used to promote energy system development. However, specific acute training variables such as mode of exercise, duration, intensity, and rest interval dictate the type of adaptations elicited.

Training and rehabilitation are complex processes that require sufficient monitoring to ensure that performance objectives are being met. The goal of the training process is to ensure that the training is progressed at the optimal pace and that the athlete is not under or over exposed to training loads. As such, all individuals involved in RTP decision-making process should have an understanding of the athlete’s current level of fitness and its relation to their clearance for RTP.

The purpose of this clinical commentary is to address the role of energy systems training as part of the RTP process. Thus, an overview of the three metabolic pathways followed by energy system training concepts will be provided. Finally, practically applicable methods are given for monitoring the training process providing practitioners with tools to quantify the training result and direct the RTP process for the athlete.

Exercise places both metabolic and neuromuscular demands on the body16 and in order to meet these demands adenosine triphosphate (ATP) must be provided to working muscle through the interactions of the three metabolic pathways:

The intensity and duration of the exercise bout determines which of the energy systems has the greatest contribution to energy supply. Activities such as Olympic Weightlifting and the 100m sprint utilize ATP at a very high rate and therefore rely on the Adenosine triphosphate-Phosphocreatine (ATP-PCr) pathways to rephosphorylate ADP to ATP. This pathway relies on the single-step creatine kinase reaction to rephosphorylate ADP and thus has a high rate of energy supply. However, there is a finite supply of intramuscular ATP and PCr stores resulting in a very limited capacity of this system.

Intermediate duration activities such as 400m sprinting must rely on higher capacity energy systems to rephosphorylate ATP. This multistep pathway utilizes glucose/glycogen to provide ATP for continued muscular contraction and will so in the absence of oxygen. However, fatiguing by-products are produced, which limit the duration of this energy system. Longer duration activites such as marathon running rely on oxidative phosphorylation pathways (aerobic glycolysis/β-oxidation, Kreb’s Cycle, electron transport chain) to sustain ATP production over the extended exercise duration. However, these pathways require the integrated delivery and utilization of oxygen and thus have substantially lower rates of ATP supply. Although not mutually exclusive, the proportional reliance on these three energy systems depends on both the duration and intensity of exercise (Table 1). 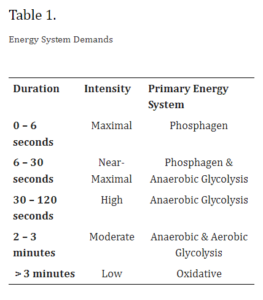 Table 1 may serve to provide a general understanding of the metabolic demands of various sport activities. For example, the metabolic requirements of sports such as Olympic weightlifting, 100m sprinting, or Marathon running, are relatively easy to classify since the intensity and specific durations of these sports biases them towards the ends of the spectrum. The demands of many team sports, however, present a greater challenge when classifying them based on metabolic or energy systems demand. A majority of team sports are comprised of maximal or near maximal sprints followed by brief periods of recovery and therefore do not utilize the extremes of the energy system as in the previous examples. Descriptions of metabolic pathways, such as Table 1, make it appear as though these pathways are mutually exclusive with distinct ‘on-off’ switches as the duration increases and the intensity of work decreases. It should be noted that each of the systems works to supply energy in concert, however their relative contributions change depending on the task. As such, team sport athletes require fitness levels sufficient to support metabolic requirements specific to their sport and position that spans the three main metabolic pathways.

The “on and off”, intermittent nature of team sport has been termed repeated sprint ability (RSA). RSA reflects a key characteristic of team sport, whereby a large portion of competition is spent performing lower intensity activities with brief bouts of maximal to near maximal efforts interspersed throughout the time played. Thus, it is important that athletes participating in activities with high RSA demands possess the ability to repeat maximal or near maximal efforts with limited fatigue. As fatigue accumulates over the course of a competitive match the ability to repeatedly sprint at a maximal speed becomes compromised. Multiple mechanisms of fatigue have been explored within the construct of RSA. In addition, many acute training and competition variables have been studied as well. For example, decreased RSA due to fatigue may be attributed to duration, work-to-rest interval, type of recovery (active vs. passive), oxygen uptake kinetics and changes in muscle metabolites. While the physiological underpinnings of RSA continue to be explored it is important to note that a variety of training methods have been proposed to address these limitations and improve RSA. For example, high-intensity interval training (HIIT) methods have been shown to improve VO2max, VO2 kinetics, mitochondrial biogenesis, and sports performance.

Energy system training terminology is not always consistent, which may result in confusion in the application of research principals to the actual training methods used. To alleviate this, Chamari and Padulo recommend doing away with physiological descriptions of training and instead propose three basic classifications for short duration – repeated effort exercise. This classification system can help practitioners develop training sessions without being confused or hindered by exercise physiology terminology. The classification system proposed by Chamari and Padulo are based on exercise duration and can be seen in Table 2. 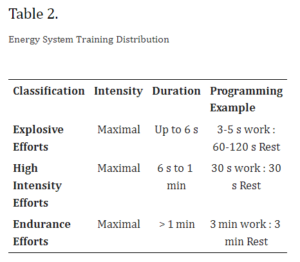 Note that longer duration exercise is not addressed within the classification structure of Chamari and Padulo; however, it should not be overlooked. While excessive amounts of long duration, endurance exercise may have deleterious effects on the explosive capabilities of power athletes a moderate amount of this type of conditioning has been found to increase performance in team sport competition as a major portion of team sport is spent performing low-intensity activities in-between high intensity efforts. During these periods, the aerobic energy system plays a central role in recovery between intense bouts of exercise and assists in repeating those high intensity efforts with less performance decrement. While the aerobic system may contribute 10% or less energy to a single sprint, with repeated sprints its contribution can rise to as much as 49%. For these reasons, a well-rounded training program should be designed to ensure that the full spectrum of the athlete’s fitness is addressed within the RTP program.