A great movement to develop the strength for pull-ups

The ring row is known by many names, including body row, horizontal row, and reverse push-up. It is a valuable movement to have in a toolbox, as it provides a functional and effective horizontal pulling motion that is hard to duplicate. Its applicability to sports such as rock climbing and wrestling is fairly obvious. Its value extends to other sports as well, as a means of correcting muscle imbalances, improving midline stabilization, and training muscles that we don’t see in the mirror. For gymnasts, it provides an early stepping stone toward harder skills. Bulgarian gymnast Jordan Jovtchev describes it as a good movement for “creating the muscles for the front lever.” It is also a great movement for developing the strength required to do a pull-up. It is a good complement to working assisted pull-ups with a stretch band or assisted pull-up machine.

One of the alternative names for the ring row gives insight into its technical execution: the ring row is essentially a push-up in reverse.  Midline stabilization is a critical component of both movements. we will discuss three different phases of the movement execution

Setup position starts with feet on ground and arms held straight by keeping active shoulder and back muscles. 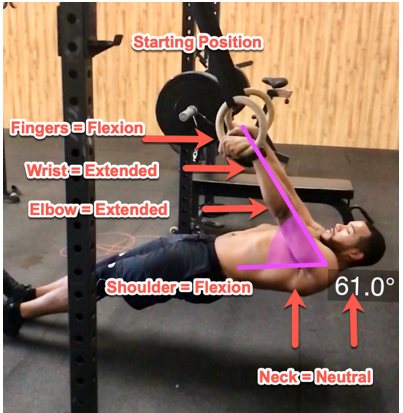 The concentric phase of the movement starts by the horizontal shrug with feet on the ground and arms held straight, using only your back muscles, pull to chest forward as high as possible. The arms do not bend at any point during the horizontal shrug. Pulling motion goes from core to extremity, beginning with contraction of the scapulae, drawing the shoulder blades together and the shoulders back.

Next phase is also called the eccentric phase which starts with driving the elbows back, brushing them past the rib cage, and pulling with the arms until the chest passes through the rings. While I have described these as distinct phases of the pull, the overall motion should be smooth — the athlete returns to full extension at the bottom position, maintaining a straight body. We should not be worried about the distinction between a pull-up (pronated) and chin-up (supinated) grip. Since we are holding onto rings, and not a bar, we are free to adjust the grip dynamically throughout the movement to what you find most comfortable. 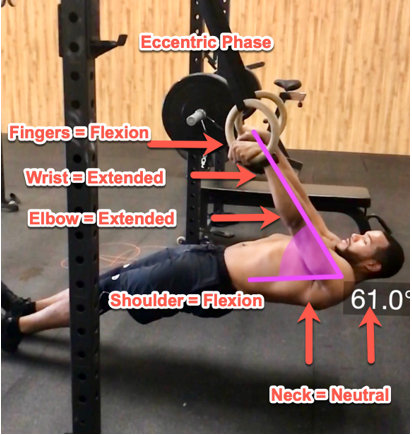 It is important to note that the ring row is not a bodyweight biceps curl! The curl involves the only flexion in the elbow joint. It is not initiated from the core. It begins and ends at the elbow joint; whereas, ring row is a compound upper body pulling movement which involves multiple joints and has real-life application.

We take care of lot of foundational movements in our program which helps you develop the strength for daily challenges. Start your 2 weeks free trial program to learn more: