What is your body type? Don’t know? Read this blog (Part-I)

Body type eating: Is it pseudoscience? Or the real deal? And should you care?

Nutrition science is notoriously confusing, which invariably leads to debates about what works—and what doesn’t.

One of the most heavily debated nutrition topics in our community? Eating for your somatotype, or body type. (“Soma” is Greek for “body”.)

People tend to fall into one of two categories on this subject.

On both sides of the debate, we’ve also found that people buy into myths, such as:

“Everyone should eat according to their body type.”

“No legitimate scientist would ever use body typing.”

Like so many hotly-contested topics, the truth lies between the two extremes.

Here’s the truth: For most people, body type eating isn’t necessary or important.

For them it’s just not the most effective tool for their needs and goals.

So why bother discussing it?

Because this is also true: Based on our work with more than 100,000 clients, we’ve discovered that body type eating can benefit some people in a couple of highly specific situations. This is especially true when foundational nutritional strategies aren’t enough to get these individuals all the way to the finish line.

In this article, we’ll explain:

You’ve probably heard about three body types. What you may not know: countless types exist.

In the 1940s, psychologist Dr. William Sheldon came up with the idea of somatotypes. (In case you missed it earlier in the article, somatotype is just another word for body type).

But his three main body type classifications (endomorph, mesomorph, and ectomorph) live on, though they’ve evolved—for the better. 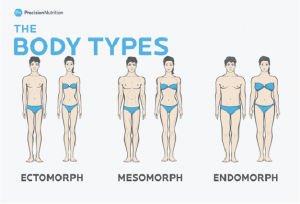 According to Sheldon’s definitions:

Endomorphs were soft, round, pudgy, and overweight.

Mesomorphs were broad-shouldered, narrow in the waist and hips, muscular, compact, and athletic.

Sheldon determined those types based only on height and weight, and front, side, and back photos (known as photoscopy). But other scientists soon rightly criticized this method as unreliable and subjective—because it was.

Eventually, Barbara Honeyman Heath Roll and Lindsay Carter developed the currently used method for evaluating body type. It assesses and scores body type based on 10 distinct measurements. According to their method:

Ectomorphy is the lack of body mass (body fat and muscle mass) relative to height and is determined using someone’s height and weight.

Once calculated, these values are plotted on a tri-axial graph to determine a person’s somatotype.

Compared to Sheldon’s approach, the Heath-Carter method more closely resembles a body composition measurement, providing a more accurate description of a person’s ratio of fat to muscle to bone. 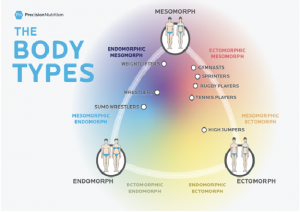 So despite what many think, the Heath-Carter method is actually highly individualized. Still, even though nearly everyone is a mix of body types, most folks can find their general tendencies in one of the three groups.

And no matter which group someone resembles, they’re not stuck. They can change their body type. For instance, bodybuilders mistaken for “natural” mesomorphs may actually be endomorphs who’ve trained and dieted hard. Or they could also be ectomorphs who’ve spent years guzzling protein shakes and lifting weights.

Your body type is not a life sentence.

Somatotype describes body components like fat mass, lean mass (muscle), and the ratio between the two—not unlike measuring someone’s body composition. That’s why, over the years, somatotype has become an assessment tool for medical professionals and researchers, similar to body mass index (BMI). While neither is a perfect system, both BMI and somatotype are simpler and more affordable than other measurement tools, which makes them accessible to more people.

That’s why, just as BMI can change over time, so can body type.

It’s just a tool used to describe someone’s body. That’s it. Like BMI, body typing gives you an idea of whether someone who is 200 pounds and 5’10” is obese, very muscular, or somewhere in between, which can be valuable in a clinical or coaching setting. It helps you to know, for example, how someone’s body is truly affecting their health.

Is there an association between somatotypes and genetics? Yes. Based on studies that looked at identical twins, we know that mesomorphy and ectomorphy are both highly linked to genetics (both about 70 percent) while endomorphy is much lower (30 percent). For a comparison, height has a heritability of about 80 percent.

Is there an association between somatotypes and athletic performance? Yes. Research has linked somatotypes with the fast-twitch muscle variation of ACTN3, the only gene associated with power athletes. Mesomorphs are more likely to have this “fast” gene than other body types, which may explain why sprinters tend to fall into the mesomorphic body type. Elite marathon runners tend to be ectomorphs while elite sumo wrestlers are usually more endomorphic.

Is there an association between somatotypes and cardiovascular disease? Yes. Because of this, you may be more or less likely to develop high blood pressure, elevated cholesterol, and other heart disease risk factors. Here’s why. Fat and muscle both serve as endocrine organs that produce hormones and proteins. Fat makes substances called adipokines, and skeletal muscle makes myokines. A recent study suggests that these substances regulate high blood pressure (hypertension) reciprocally. Overall, myokines (from muscle tissue) seem to decrease hypertension while adipokines (from fat tissue) increase it.