Monitoring the training process provides practitioners with the ability to quantify the volume and intensity of training an athlete has performed. In doing so, the practitioner can methodically manipulate training variables and increase or decrease the amount of training stress on a given day to allow for consistent improvement without exposing the athlete to loads that they are not prepared to tolerate. Several methods have been proposed to assist practitioners in understanding the dose-response relationship of training. In order to provide practitioners with low cost methods, this commentary will focus mainly on the use of Session Rating of Perceived Exertion (sRPE). More objective methods of training monitoring exist (e.g., HR, Global Position System (GPS) tracking, etc.); however these methods can be costly and require specific expertise to handle the data is required.

External training load represents the work performed by the athlete in a given training session. It can be quantified in several ways, such as the distance covered, amount of high speed running performed, weight lifted, or total training volume. The rehabilitation specialist or strength coach plans the expected external training load for a given day; as they select the training modality, exercise intensity, volume of work, and the work to rest ratio. Various methods of external load quantification have been explored in the literature. The use of integrated microtechnology (GPS, accelerometers, and gyroscopes) has become one of the most popular methods of external load quantification in team sport as these systems allow for the quantification of running, collisions, accelerations, decelerations, and change of direction measures during practice or sports training. Unfortunately, the expense of these systems may make their use impractical for practitioners in private practice or those working with teams or smaller universities with limited budgets. In these cases charting the details of the athletes training session is a simple alternative to track external training load as seen in Figure 2.

The athlete’s response to the planned training session is termed internal training load. A well documented method of internal load quantification is heart rate response. The relationship between heart rate response and exercise intensity during a training session has been explored using various training impulse (TRIMP) models, which assign a weighting factor to an arbitrary number of HR zones. The HR zones are then summated to create a training load score for a given training session. While this approach is easy to apply the financial burden of purchasing equipment is still present and the kinetic response of HR adjustment makes them impractical for interval based training. Thus the use of internal load quantification via the session Rating of Perceived Exertion (sRPE) method is likely the most clinically applicable method available.

Originally developed by Foster and colleagues, the RPE method allows the quantification of training load without the use of heart rate technology. Foster and colleagues found a consistent relationship between TRIMP scores and the individual’s RPE during aerobic exercise and others have found similar relationships with RPE and %HRpeak and blood lactate. The athlete is asked to rate the intensity of the training session utilizing the descriptors of the CR10 Scale (Table 7). An arbitrary training load based on session RPE can be calculated by multiplying the corresponding number for the descriptor on the CR10 Scale by the duration of training, in minutes. These values can be stored in any spreadsheet software file for the individual athlete and changes in training load can be charted over time (Figure 3).

Initially developed for aerobic exercise, session RPE has also been found to be valuable for quantifying other training activities. For example, session RPE has been used as a marker for training load during intermittent team sport activities and resistance training, providing practitioners with an affordable and easy to administer method of quantifying the internal training response.

Finally, in addition to quantifying the session as a whole, RPE can be used to quantify bouts of work during energy system training. If the practitioner lacks a HR monitor, a prescribed RPE could be presented to the athlete for their work intervals. For example, performing high intensity efforts at an RPE of 8-9 for 30 s of work followed by 30 s of recovery at an RPE of 2.

Daily training loads can be evaluated over time to quantify how much training the athlete has performed during their RTP process and to ensure that they have trained enough in order to withstand the loads of practice and competition. As a method of understanding periodization in sport, RPE has often been reported in the literature in absolute terms, reflecting cumulative loads over one to two week blocks of training, or percent changes from one week to the next. While this method of reporting provides a useful look at how an athlete’s program is progressing it tells little about the cumulative effect that training has had on the body. Utilizing RPE, a recent method proposed by Hulin and colleagues seeks to take into account both acute and chronic load during the training process as a way of quantifying changes in fitness and fatigue. This method, termed the acute:chronic ratio, allows practitioners to determine how the athlete is tolerating the training processes over time, while slowly progressing back to pre-injury fitness levels.

The acute load represents the most recent weekly training load for the athlete while the chronic load is the four-week average of work the athlete has performed. The acute load is divided by the chronic load to produce a single number, which describes the athlete’s current status. A ratio greater than 1 would indicate that the acute load for that week exceeded what the athlete had previously been exposed to. Using this method, it was observed that rugby athletes who exceed an acute:chronic workload of 2.11 were at a 3.4 times greater risk of injury. The metric is easy to compute and a visualization of the training response during the RTP program can serve as a discussion point amongst medical, rehabilitation, strength and conditioning coaches, and coaches. 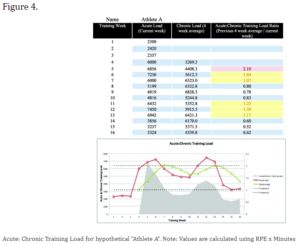 RTP from an injury is a challenging process for everyone involved. The numerous factors inherent to decision making within the RTP process have been addressed in the recently updated StARRT framework. The framework is defined by a comparison of the individuals risk tolerance to the risk involved in their RTP. This clinical commentary has attempted to demonstrate how this can be used when assessing and programming energy system development in the injured athlete. An assessment based on the demands of the sport and the acute:chronic training load can be utilized to monitor the gap between these two domains. The implementation of energy system development principals allows the clinician to address the athlete’s readiness and tolerance to the increasing demands they will face. By approaching the return to sport question in this manner the RTP team is able to ensure that relevant risks specific to capacity and workload are discussed and addressed during the rehabilitations and RTP process. This allows the athlete to RTP with a capacity that is able to handle the levels of stress that their spor requires.