Though we accept that some changes are inevitable, we can push them as far into the future as possible with effective and continuous training. Our data strongly suggests that the limiting effects of aging can be delayed through CrossFit training. Through constantly varied functional movements executed at high intensity, we create greater health—i.e., greater work capacity across broad time and modal domains measured throughout life.

CrossFit is a hedge against the effects of aging. Through training, we elevate health markers to well above average so that with age they also decline at a slower rate and remain above average at each point on the age continuum. This is a fountain-of-youth effect and masters athletes in general show a youthfulness that does not match their age. This effect of training attenuating the negative effects of aging is also well supported by research. According to the literature, compared to their non-training peers, masters athletes display increased testosterone, lower blood pressure, increased cardiovascular respiratory endurance (Hayes et al., 2013), increased strength, greater muscle mass, greater bone density (Powell, 2005), better mobility and balance, better spinal function (Wright, 2012) and better brain function (Zhao et al., 2016).

Lifelong exercise may also be the key to reducing the risk of dementia (Brown et al., 2017). Masters athletes have better bodies and better brains.

CrossFit is changing the paradigm of what is possible for the older athlete, and there is no downside to being optimistic in our belief about the level of capacity that can be developed by an older athlete. Apart from the data that we have gathered from the CrossFit Games, we also have empirical data from the community. Long-term athletes like Nicole Carroll, Annie Sakamoto, Lisa Ray, Jacinto Bonilla and Andy Hendel are powerful role models who defy age.

In 2016, we surveyed 10 athletes in the community who had trained CrossFit continuously for longer than 10 years and are now masters. The ages ranged from 40-58 years, and all but one train four to five sessions a week. Seven of the 10 report that they are still getting strength PRs (the other three said strength varied with frequency of training), and all had dramatically improved Fran times. All said that they expected to do CrossFit for the rest of their life, and only one of the 10 thought he had peaked as an athlete (90 percent thought they hadn’t hit their peak!). Six of the 10 had achieved a PR for both a strength and a benchmark workout in the last 12 months, whereas nine out of 10 had achieved either a strength or a benchmark PR in the last 12 months. That is significant. Sixty percent had recently improved in both strength and conditioning, and 90 percent had recently improved in either strength or conditioning. Five out of 10 said they were confident they could complete a marathon in less than four and a half hours without any extra specific training, and another four said they weren’t sure but they would give it a go.

Only one wouldn’t attempt a marathon for fear of injury. This data is inspiring. It would be an impressive sample even if the average age was 20, but this is a group with an average age of 46. Interestingly, 80 percent said that their primary motivator was wellness. We should be cautious drawing conclusions because the data is anecdotal and the sample size small, but it does highlight the positive outcomes that sustained training can produce for the masters athlete. CrossFit is as effective for the masters athlete as it is for the younger athlete.

Use It or Lose It!

The reality is that it really is a case of use it or lose it, and in most cases, if you start using it again, you get it back. Even for the previously sedentary, high-intensity exercise can substantially improve health markers in a relatively short amount of time (Howden et al., 2018). A key factor in successful aging is being active and maintaining continuity with training across the lifespan. We need to avoid sedentary aging at all costs in order to avoid the negative effects of inactivity. This applies to all ages, but it is especially important for an older adult.

There are substantial benefits to living the life of an athlete. Masters athletes with a history of training live longer and have a higher quality of life in later years. It is clear that the more capacity you develop in earlier life, the larger the hedge you have against lost capacity in later life (Mckendry et al., 2018). This concept is an extension of the sickness-wellness-fitness continuum and is consistent with what we teach at the CrossFit Level 1 Certificate Course. This is CrossFit’s model of aging, and it is represented graphically in Figure below. High capacity through training early in life, combined with continued training throughout life, leads to relatively high capacity in later life, which attenuates the effects of aging.

It is important that the trainer does everything possible to keep a masters athlete training, despite illness or injury. Equally important is motivating sedentary masters to start training. Older adults who return to training in later life can regain significant capacity. As noted by P.R. Langer (2015), “Studies show that even individuals who have previously been sedentary can significantly decrease their risk of serious illness and risk of disability by starting a fitness program later in life.” 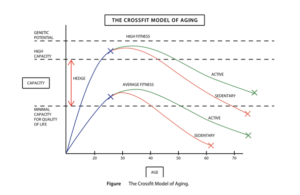 It is easy to make false assumptions about the inevitability of decline with an older athlete, but when we look past the effects of being inactive or having a poor lifestyle, we see significantly fewer effects of aging. We will all age, but how we age is a function of the choices we make and the degree to which we continue to develop work capacity. As trainers, we have the power to dramatically improve the quality of life of masters athletes through CrossFit.

The conclusion is obvious: Be as fit as possible at every stage of life.